Trust me, you’ll know when your hair is on fire.

buddhism is my homebrew

This is my response to ~C’s “Buddha is My Homeboy”:http://coolmel.zaadz.com/blog/2007/9/buddha_is…, cross-posted here because I felt like it. 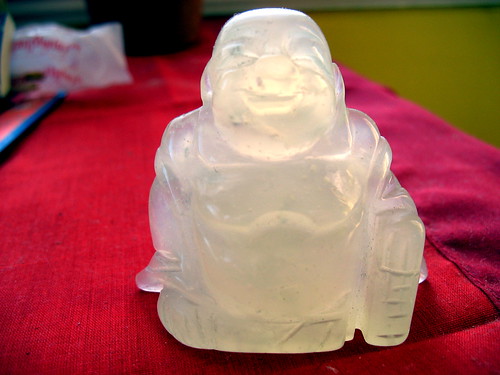 Trust me, you’ll know when your hair is on fire. Seeking that pond becomes the consuming goal, even if it takes many strange and unusual forms along the way.

But I don’t think we all have one path up the mountain or to the pond, or wherever enlightenment resides. A lot of Buddhism works for me, but I was raised a protestant boy and studied Judaism and Hinduism and a number of other religious traditions in my spiritual casting-about. I spent a lot of time comparing religions, comparing mythologies, and comparing philosophies in the hopes of finding common thread – a unity of knowledge… and the beautiful thing is that those threads do exist; finding them cuts through dogma and sectarianism and is at the same time a humbling experience.

My Buddhism really is a mixture of who I am today, my personal experience, my cultural, historical context, my education (self, academic, life, spiritual), what i’ve studied of Buddhism as it’s come to the West, and finally, a teensy bit of realization of my own here and there…

So – ~C – if you don’t mind, I’m going to borrow a few terms and phrases from you and rip-mix-burn my own new one: my Buddhism is my homebrew.