Yesterday, I ran through a parking lot with my arms outstretched, gleefully giddy, and felt so totally free…

Does Spiritual Practice Make You Happier?

Part of the the Heart & the Law collection 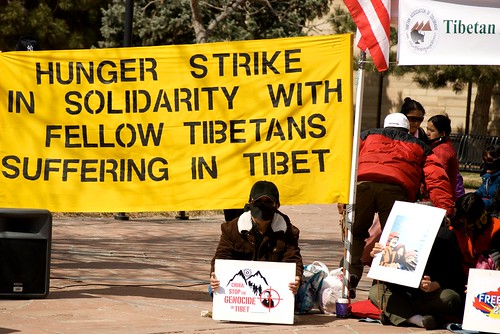 But you didn’t come here for the short answer, did you? (And if you did, well, I’m too wordy for that!). And the long answer is much more complex and intricate.

Long answer: Depends on what your definition of ‘happiness’ is.

Well, that didn’t make things any clearer, did it?

For most people, happiness isn’t something that’s experienced as a primary emotion, as much as it is a commingled experience of feelings such as contentment, satisfaction, bliss and joy; and also the absence of negative emotions — jealousy, anger, sadness, disappointment, confusion. Who can really define happiness in a clear, concise manner, without using these terms above? Who can encapsulate its meaning into something profoundly simple yet broad enough to describe the entire range of human bliss?

I’ve heard a lot of people confused by their practice when – after diligently attending to the practices of their chosen path – life doesn’t get easier or happier. Parts of their experience they’d taken for granted start to fall away. Rules and concepts they believed stable and reliable no longer apply, and their clear knowledge of the right choices begins to waver, blurring from a clear line into a gradient of many options.

Most spiritual practices aren’t designed for prolonging any particular state of mind such as ‘happiness’ or ‘joy’, or eradicating emotions like anger or jealousy. Meditation, for example, increases awareness of mental processes, allowing a person to see how their feelings, thoughts, and emotions appear, fill the mind, and fade back into the background.

Physical practices such as yoga teach awareness of the way energy and feeling work in the physical body, offering a visceral understanding of the way each part connects to and works with the others. In fact, all the practices I’ve experienced deal with awakening to a space of awareness, of opening to and seeing what’s going on around you and inside you right now. They all deal with awareness.

But looking at anything really closely exposes imperfections, flaws, blemishes, differences. Nothing is perfect and uniform, no matter how near or far your perspective… (though I like to say that makes everything perfect!).

That’s how the life you’re used to can fall apart, right in front of you, as your spiritual practice deepens.

If you were taught that the end of your practice is happiness, you’d probably feel cheated, disappointed, unproductive, disillusioned. Add confusion to the list and you might think you just fell off the wagon. But you’re actually just riding through the rough parts of the trail.

It comes down to that awareness. Your life hasn’t gotten worse; you’re more aware of what’s going on, more aware of your responses to life. The peaks and valleys you used to miss, ignore, or smooth over by virtue of not paying attention, by resisting, or by denying, now spread out unavoidably in front of you.

And you likely see yourself making these decisions that part of you understands aren’t your best choices, but that another part of you feels are your only choices. When you feel sad, you feel totally aware of your sadness. When you feel angry, you feel totally aware of your anger… But if you’ve been taught that enlightenment is total, unending bliss, you might also feel as if you shouldn’t be angry, or shouldn’t be sad, or should just let things pass without attachment. But detachment by itself does not awaken a person, and the common perception of detachment goes like this:

“Don’t feel too strongly for or against anything… Let it be, let it flow… I shouldn’t want things or resist things…” & so on

We’re human. We’re expressed in a form that feels love, lust, desire, anger, sadness, joy, pain… and to detach fully requires that we resist the very form we’re given; it requires pushing away a part of what we are. And while that’s not impossible, I wonder if we place too much attachment on the idea of detachment itself; I hear so many people say ‘I shouldn’t be angry.’ or ‘I shouldn’t be upset’ when the fact is, such self-recrimination redoubles and intensifies the very emotions that trouble them so.

Spiritual practice is going to make you tremendously angry, tremblingly sad, deliriously happy. In fact, for a while everything will feel vastly intensified, if you let it; if you don’t resist it.

And then, sooner or later, will come a glorious experience. You’ll drive home one day and hear yourself say “I’m mean because I broke up with so-and-so”, and you’ll hear another part of yourself say “I don’t need to feel that way,” and your ego will slink back. Maybe it will come out a little later and taunt you for something else, and you’ll strike back with “That’s not important to me.”

You’re liberated from being intimately identified with the voice that strikes you down – that “I’m a really bad person. Haha!” smug voice that derives no small amount of satisfaction out of self-hatred. Soon you realize that you’re also a step behind the waves of emotion that used to completely shake you to your core… You still feel as strongly, as ever but the emotions no longer define you, and so you hold onto them with much less anxiety and energy.

And in that space, all the emotions of being human – love, anger, sadness, and others – still rise and fall, but behind it all is a peace, an open space where you are you, the atman, the holy part, the unbreakable you. And this, truly, is a form of happiness that can coexist with all other emotions you’re capable of feeling.

Yesterday, I ran through a parking lot with my arms outstretched, gleefully giddy, and felt so totally free. That moment, that feeling, such intimate and ephemeral perfection, and I was free to let the joy go naturally instead of fight to keep it alive.

Does spiritual practice make you happier? No, it brings you awareness, intimacy with now and here, freedom from the bondage of your past decisions and arbitrary rules. It brings you tremendous turmoil and then unstoppable peace. It brings you to your center, to the place of your calm, where you find a happiness that exists in the presence of all things, even sadness, anger, disappointment.

Does spiritual practice make you happier? Yes. It just takes you all over the map along the way.

Credit goes to Buddhadharma for the inspiration for this entry with their recent forum “Does Buddhism make you happier?” — and to Sara for helping me talk through these ideas and providing a few real-world examples.