“Too often, people think that solving the world’s problems is based on conquering the earth, rather than touching the earth.” C. Trungpa

Part of the the Heart & the Law collection

For as long as I can remember, I’ve wanted to change the world – I’ve never quite known how, or in what way… I wanted to leave the world a better place than when I got here. I believe, on some level, we all want to save the world. 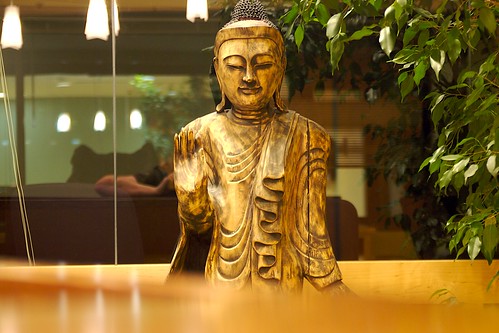 As a result of that desire, we spend our lives in pursuit of that one purpose – whether it means securing a livelihood and future for our loved ones by working hard, making a profit and saving money; or speaking out against global warming, fighting terrorism at home and abroad; or becoming a deeply spiritual being and meditating for the liberation of all beings.

I wonder if that very desire – to change the world – to turn it from what it is into what it is not – might not be what gets us into so much trouble. What motivates Christian fanaticism is the same thing that motivates Muslim fundamentalism, the same thing that pits environmentalists and the oil industry in intractable debate, the same thing that fuels both hatred and adulation of a despot: a belief that the world is wrong the way it is, a belief that in some deep-rooted way the existence of mankind is scarred by the sin of existing, existing with anger, with sadness, with joy and love and desire and envy.

When I’ve talked with friends about the Bush administration’s use of waterboarding, I felt something rising up within my being, something powerful and tempting, as duality often is: anger over the use of torture, an anger that threatened to turn those using and supporting its use into my enemies, into dark, inhuman, unfeeling shadow-beings who deserved to suffer for their actions.

Why? Because I didn’t understand how people could be so harmful to each other, how someone could stand in front of us and tell us that certain crimes against each other were justified because it is the only way our enemies would talk, would change, would convert to our side. In those moments that I felt the darkness rising, however, I understood.

That very desire to save the world, to change the world, can divide us all and feed the violence that we wish to leave behind, as if we are pitted in a battle, all against all, to be the ones to bring the world to peace and prosperity and enlightenment, to overcome those who don’t believe the world will improve our way, to fight against ideas and actions counter to our own.

With change there is always opposing force; and forces which oppose generate heat and friction; hate and rancor; ill-will and violence. Here we are, each of us, believing that we know which way to steer the universe to save us all. And yet most of us still don’t even understand ourselves.

Is it my work to change you into my image of perfection? Or is it my work to understand myself, my being, my place in this existence and to align myself with the vision of good I want to see in the world?

True change through skillful action requires tremendous understanding, a sort of nearly-omniscient wisdom and knowing that very few of us – if any – possess. Yet so many of us believe – whether by the morality we’ve learned or the concepts we’ve formed of right living – that we are imperfect, that who we are now must change, must conform to some ideal version of ourselves that we’ve envisioned. But is it truly possible for us to know what shape our perfect being will take while we are still occluded by ignorance?

Or should we remain open; learning in every moment?

What use is it to tell ourselves with anger that we are not who we should be? Or that we have failed to live up to our own ideals in the past? What will that energy – angry, inward, sharp – create in ourselves except a dual existence: I, the struggling saint, and me, the sinner, the spiritual terrorist, who knocks myself down at every opportunity?

And isn’t that energy reflected outward in our immediate world and so on? If we do not choose to forgive ourselves for our own perceived failures, to spend our time learning who we are and how to live our lives with the least resistance and most understanding possible – then we play out the same charade on every level of life: your loved one must stop nagging you; your family needs to be more supportive; the other driver is a crazy bitch; your boss should pay you more; your government officials should be impeached and tried for treason and war crimes; all evildoers in the world should pay dearly for their crimes.

And so the best of intentions turns our hearts dark and bloody.

I used to hate the sight of decrepit, crumbling buildings; graffiti; trash blowing like tumbleweed across the road; the noise of cities. With new eyes, I have come to see these things as a part of nature, just as we are a part of nature; I have stood on the top of a landfill, the odor and sandy brown dust of discarded remnants of human life stinging my eyes, looked out over sugar and pineapple fields, past a green and grey dormant volcano, toward the sea and sky stretched out in blue and white until they faded at the horizon, and lost the line between pretty and ugly.

Without accepting ourselves, we can’t see who we really are and who we will become. Resistance necessitates something to resist; a force to push against; resistance creates ignorance, anger, violence, hatred inside us, even against ourselves. Acceptance reunites and creates peace and compassion, a place of healing. As we allow ourselves to heal, we learn the wisdom and understanding of the things we pushed away. We learn the secrets in ourselves that we locked away so that we could fight the good fight.

Where does all that energy go – the force of emotion we collect in support of resistance? All that energy that used to drain out of you and yet seemed to do so little to help the world, leaving you cynical, disillusioned, and too tired for continuing the work of actualization?

It becomes ours for growth. We’ve stopped using it like a napkin against a torrential downpour. We begin to act – not out of desire to change and reform the world, but simply to provide aid and compassion – where we are most powerfully able. Change itself does not stop because we stop trying to force it; change is the only constant we know. The lie of ‘changing the world’ is that it isn’t about creating change but rather resisting it.

Step out of your way, step out of the way of evolution and actualization and becoming – enter the slow and agonizing process of self-acceptance, of forgiveness, that will inspire self-understanding. See the lines shimmer and fade and open your eyes to a world that is evolving on its own, not in spite of us, not on account of us, but with us. Even our desire for change, our ability to feel indignant and recognize injustice, are a part of who we are. So, too, are war and cruelty. Bloodshed, violence, cruelty, suffering – these will never be things we love, but responding with hatred only fuels their fires. We can learn from the wisdom of the Buddha, of Jesus and of countless other teachers who have always recognized that hate only begets hate, and that only love, understanding, forgiveness, acceptance can overcome hate.

So let us not turn our eyes away from injustice, from violence, from the terrible things we do to each other and to our world, but let us also remember to see justice, joy, kindness, and the beautiful and limitless love of which we are not only capable but actually practice every day to those closest to us.

Let us stop judging ourselves first, slowly, as we can, stop telling ourselves what we shouldn’t be and start to listen to what this form is telling us about who we are. Your evolution doesn’t stop even if you stop trying to force it; you were built to grow, to evolve, to become. When you stop forcing, you allow the natural process of your own growth to continue. And as we begin to understand the parts of our nature that make hatred and violence possible, we see ourselves respond in those ways a little less powerfully, less easily; we begin to understand the why and the how, and what things lead to such acts.

And suddenly we reflect peace, healing, understanding, and becoming out into the world, and the natural process of the world’s growth feeds off that energy, first in your immediate community and quickly outward in ways none of us can imagine.

As far as I’m concerned, I don’t want to change the world any more. I want to be part of the world becoming.