Nothing — nothing — will ever get done while we stand around pointing fingers at each other.

we didn’t start the fire

I have a problem with cute indie girls. The ones that’ll charm you with their sweetness one moment and then tell you exactly how it is the next. 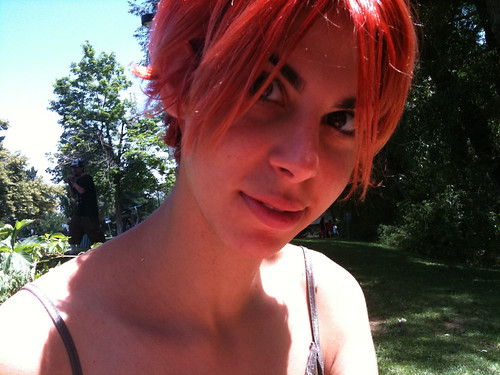 So this afternoon, I made it past a gauntlet of two bearded boys in kelly Greenpeace jackets asking if I had a moment to save the world. It’s not that I don’t think the world’s worth saving. Certainly not that I didn’t have a moment. Part of it is the tenacity of the Greenpeace activists on Pearl Street, positioned at key places along the way to interrupt as much traffic as possible. Another part of it is that I don’t support most of Greenpeace’s current platform or methods.

I made it past these two boys only to be accosted on my way out of Starbuck’s (yeah, yeah, look at that fuckin’ hipster wearing his corduroy jacket and sipping his latté and all. Go ahead, poke fun!). I made it ten feet before a cute, bespectacled, pierced indie girl with streaks of blue in her black hair smiled and asked how my day was going.

So yeah, I stopped. She made small talk for a few minutes. College student, forget which one, studying art (of course). She asked me what year I was. Of course. Lots of smiles and eye contact. Really working the charm. I knew it was coming.

So do you know anything about Greenpeace?

So I told her that I wasn’t currently interested in supporting Greenpeace’s efforts. But don’t you want to save the world?

Here’s the deal, I told her: Have you ever heard of Zaadz? Or Gaia.com? Yeah, I helped build that community from the ground up. Three hundred thousand people currently, all with a vision of a better world.

And you know the thing I learned? We all have different visions.

In reconsidering change, I wrote:

Here we are, each of us, believing that we know which way to steer the universe to save us all. And yet most of us still don’t even understand ourselves.

I take issue with people and groups who want to blame others for their problems, for society’s problems, for the world’s problems. Not because the people around us don’t bear some responsibility for all the messes we co-create, but because when we refuse to take responsibility for how our own actions create this world, we refuse to accept the possibility that we have the power to heal the problems we face.

We’ve all grown up with frightening shadows of terrible things at home and abroad: famine, disaster, war, nuclear power, global warming. So many fears, so many problems, many of such immensity that we feel powerless to do anything except toss a few dollars here and there to worthy causes, try and recycle our soda cans, and eat green or local or vegetarian.

Billy Joel sings we didn’t start the fire / it was always burning / since the world’s been turning — but we do keep the fire raging. Not by ignoring the problems or by doing too little, but by pretending the true problems are anywhere except within ourselves.

Nothing — nothing — will ever get done while we stand around pointing fingers at each other.

Rampant blame and the failure to accept personal responsibility are symptoms of short-sighted thinking. There’s no logical reasoning in attacking an evenly-matched opponent when you want to get something done. Entrenching yourself against an enemy only pitches the battle and prolongs both sides’ inability to achieve their goals. Even when a small victory is achieved, it is often quickly overturned or at least defanged by detractors.

So, Greenpeace (and any other group hoping to change the world), if you want my support, dedicate your efforts to finding common ground. We are all human and sharing this world together, and we do share enough to understand each other, even if only a tiny bit sometimes.

There are no insurmountable divisions between men and women; I believe that with all my heart. We create the walls between us out of the dust of thoughts and memories, held by the mortar of our experience. And our experience is tinted with our prejudices, imagined and real, inherited and newly created.

If you want to change the world, I said, find common ground. Look not for weaknesses in your enemy but for each other’s strengths and insights. Do not tear each other down, but reach out a hand to each other.

So she closed her book, smiled at me, and said, You’re a Buddhist, aren’t you? Bet you’re going to tell me ‘change must come from within.’